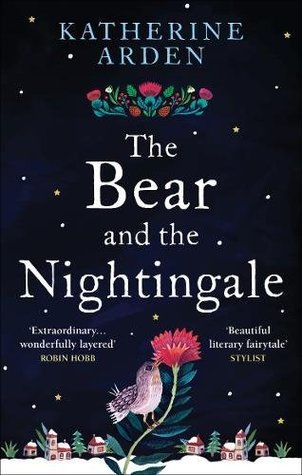 Title: The Bear and the Nightingale

Series: Book #1 of The Winternight Trilogy

At the edge of the Russian wilderness, winter lasts most of the year and the snowdrifts grow taller than houses. But Vasilisa doesn’t mind—she spends the winter nights huddled around the embers of a fire with her beloved siblings, listening to her nurse’s fairy tales. Above all, she loves the chilling story of Frost, the blue-eyed winter demon, who appears in the frigid night to claim unwary souls. Wise Russians fear him, her nurse says, and honor the spirits of house and yard and forest that protect their homes from evil.

After Vasilisa’s mother dies, her father goes to Moscow and brings home a new wife. Fiercely devout, city-bred, Vasilisa’s new stepmother forbids her family from honoring the household spirits. The family acquiesces, but Vasilisa is frightened, sensing that more hinges upon their rituals than anyone knows.

And indeed, crops begin to fail, evil creatures of the forest creep nearer, and misfortune stalks the village. All the while, Vasilisa’s stepmother grows ever harsher in her determination to groom her rebellious stepdaughter for either marriage or confinement in a convent.

As danger circles, Vasilisa must defy even the people she loves and call on dangerous gifts she has long concealed—this, in order to protect her family from a threat that seems to have stepped from her nurse’s most frightening tales.

This. Whole. Trilogy. Is. AMAZING!

I saw people loving this trilogy. I read the blurb. I purchased. It was cold and Wintery outside when I started the first book. I loved it. I’m still slightly teary. (as I’m typing this book I have read all 3 books and book 3 guys…. I’M STILL CRYING!)

I was promised a wild child, sweet bean who might just be a witch and a frost-demon-king boyfriend who doesn’t know what feelings are, and BOY DID THIS BOOK DELIVER!

I LOVED all the Russian Folklore that this book focused on and had woven through out in almost every. single. detail. And I am absolutely in love with the Domovoi, and am sour about the fact that there isn’t a little hearth guardian with a fiery beard that I can feed bread and honey wine, and in exchange he protects my home (in this book the Domovoi also finishes off any unfinished sewing that people leave around). WHY DON’T WE HAVE THIS MAGIC IN OUR EVERYDAY LIVES?!?

Vasya – Not a Maiden, but a Woodsprite

♥ Is best friends with all the house spirits/guardians, she can see them because ~ witch bloooooood ~, and since Christianity is sweeping across the land, the Chyteri are starting to fade so Vasya takes it upon herself to help them when she can because she’s an ANGEL!

The stallion snorted at her and pinned his ears.

“You have bad manners,” Vasya told him. “But I suppose Kyril Artamonovich drags you around by the mouth.”

The colt put his ears forward. ‘You do not look like a horse.’

♥ Is literally a wild child. You think wild animals are wild? Vasya has been taught how to be a lady since birth and YET! She is the wildest thing in that forest. She fits in with the Chyteri, she could just start living with them and they wouldn’t even know she’s not one of them.

♥ She would save you from the Rusalka (water/river guardian) once, but if you bother her again, then you will become her lunch. Vasya doesn’t make the rules.

Vasya’s character development over the course of this book, and the whole trilogy for that matter, was beautiful to watch. I couldn’t help but root for her and cheer for her around every corner and every hurdle. And there were a lot of hurdles. It was so so SO heart warming and wonderful to see Vasya come into herself and say “You know what? You all find me unusual and that’s fine. It upsets me but that’s fine. But don’t call me something I’m not, and don’t punish me for something I haven’t done.” And it only gets more and more exciting to watch.

“All my life,” she said, “I have been told ‘go’ and ‘come.’ I am told how I will live, and I am told how I must die. I must be a man’s servant and a mare for his pleasure, or I must hide myself behind walls and surrender my flesh to a cold, silent god. I would walk into the jaws of hell itself, if it were a path of my own choosing. I would rather die tomorrow in the forest than live a hundred years of the life appointed me.”

Watching Vasya defy what everyone wanted and expected of her over the course of 3 books was magical, as was seeing her grow into her own magic and decide what she wants to do for herself.

I also like that while the focus of the book is “uh oh, big trouble in coming and Vasya is the only one who seems to understand that so she’s going to try and fix it”, she wasn’t going on a quest to find people who do listen. She wasn’t raising an army to help her. She fought against this evil with everything she already knew and then strives to find out more.

What I’m trying to say is, Vasya didn’t run around trying to make people believe her. She didn’t need to. Nor was she just going to back down when she knew she was right and someone was getting in the way of her ultimately helping the whole village.

Her defiance against the norm for all women, and for her seeing as they all call her a witch, wasn’t loud, but it was noticeable and that was enough.

A soft voice and a bent head were more fitting when a woman addressed a priest. This girl stared at him brazenly in the face with fey green eyes

I love her so much, and I’m kinda sad that I won’t be reading anymore about her unless the author decides to write more books. 😦

♥ Very frosty. Both literally, because… he’s the winter king, and because he is a little frosty to people. Just a little. TO. EVERYONE. Except Vasya, and his horse.

♥ Does whatever his horse tells him to, she is very wise and he is a Good Boy™ for listening to her.

“Why did you bring me here?”

“Do I? You had been wandering in the forest too long; your feet and hands are frozen. Perhaps you should be honored; I don’t often have guests.”

He studied her a moment more. “Are you hungry?”

{…} “Did your horse suggest that as well?” She asked, before she could stop herself.

The man laughed, and she thought he looked a little surprised. “Yes, of course. She has had any number of foals. I yield to her judgement.”

♥ Is THE death god of the lands. He goes into death god mode and leads all who die to the other side. So, he’s a busy boi.

♥ Centuries old, could kill people and destroy their homes by blinking and summoning a blizzard strong enough to bury them all, but he likes to collect fancy cups in his spare time.

Morozko went from “I can’t love you, I’m not a man and so I am not capable of love.” *disappears dramatically to do winter king things* to “Vasya, can you nOT!” *defies the laws of his very existence to safe Vasya from dying, while sighing about her being ‘a foolish child’ the whole time* *immortal king experiences panic more in the little time he’s known Vasya than in the several centuries he’s been alive*

I also very much loved Morozko, even though he wasn’t on every other page in book one, he became much more of an active player (he was still very much in all the happenings of book 1 too though!) which I enjoyed very much. More Vasya and Morozko combo = one very happy reader.

Over all, I loved this book deeply. I got upset every time there was a “a woman shouldn’t do this, that or anything really” conversation between some of the main-ish characters, but the anger was soothed every time Vasya bursts into the scene with a “I’ve befriended all the local demons and have discovered my inner fashionista style!” *dresses as a boy* *all the men collectively scream about her virtue being ruined, while Morozko is definitely in the background giving Vasya a double thumbs up*

I loved that in this one we got to see more of Sasha and Olga, who were introduced at the start of book one but then went off to do their own thing later, as well as the Moscow setting. There was buckets of betrayal, love (both family love and romantic love… well… as romantic as a frost demon can get) and mystery – I sure as heck didn’t see THAT TWIST coming. But looking back it was kind of hinted at, I just didn’t see it until later. I did not hoover up the breadcrumbs like a wise pigeon – I went looking for the loaf.

MY GIRL VASYA! I KNOW THIS IS YOUR BOOK WITH THAT TITLE! But this one really made me cry. I knew more people were going to die but JESUS, in the first 50 pages?? One of my favourites??? NO! HOW COULD YOU?!? I THOUGHT I COULD TRUST YOU!

There was more magic, mayhem, *through clenched teeth* Witch Hunts, sprinkle in some more romance for the heart, and oh y’know, the impending doom of war and potential eradication of a species. OH, and Baba Yaga shows up. She was a bit rude tbh, BUT SHE WAS THERE!

Have you read The Bear and the Nightingale?? What did you think?? Do you enjoy reading folklore heavy books?? Which ones are your favourite??

11 thoughts on “Book Review: The Bear and the Nightingale by Katherine Arden”