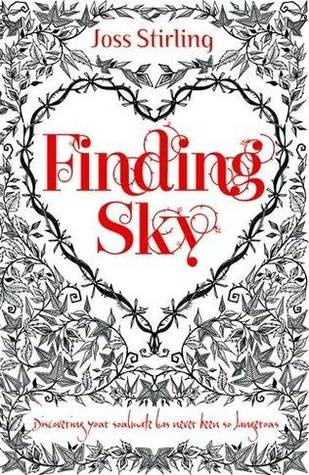 When English girl Sky, catches a glimpse of bad boy Zed in her new American high school, she can’t get him out of her head. He talks to her with his thoughts. He reads her mind. He is the boy she will love for ever. Dark shadows stalk her past but a new evil threatens her future. Sky must face the dark even if it means losing her heart.

I think… I set myself up for disappointment here.

I had such high hopes for this book, a few people told me they had enjoyed it and so I was EXCITED!

I did not enjoy this book much.

The Setting. I’m a simple gal. I see a forest. I go in the forest. I make friends with the forest. I live happily ever after for the rest of my days with my tree friends.

This book is set in Colorado with a heavy emphasis on the scenery. Mountains and forests galore! My imagination was pretty pleased imagining the scenery. And with the mountains and colder climate, you’re bound to get loads of snow. There was a lot of talk (and focus) on skiing and snow boarding which I didn’t mind.

The Music. Our MC, Sky, and the “bad boy” Zed are in the Jazz band of their High School! Two of the other characters are also members of the Jazz band. Nelson, who becomes best friends with Sky rather fast, and Yves – Zed’s older brother (and also the nicer one).

And also, Sky’s parents are artists. We like art around here and so we appreciate any book that highlights its importance!

The Concept of Savants. There is nothing I love more in a book, than magic appearing among the mundane. One of the things I enjoyed about this book is that we got to learn about Savants and their abilities, which was interesting and fun! I liked the Benedict family purely because the idea of a family of gifted folks combining their gifts to fight crime is an awesome concept and I would like to read more about them helping lock up criminals who thought they had gotten away with it. Like CSI except the team is a family with gifts that let them sense things and see into the past.

Sky, our Main Character, was vapid. Void of anything. In the beginning I was rooting for her. Sky had a traumatic past that caused her to kind of lock up all the memories from her early childhood – to the point that she doesn’t even know her real name. Naturally I felt for her, hoping for her sake that even after whatever torment she goes through later on in the book, she gets a somewhat happy ending. But she was kinda… empty?

She got better towards the end, coming into her own strengths and abilities, fighting back against the people who want to exploit her.

But it felt… artificial??

It felt like we were missing a key part of her character development? By the end I was like “WHO IS SHE??? HAVE I MET THIS CHARACTER???”

I’m happy she got stronger, and started standing up for herself but?? Where did it come from??? Considering the whole book is from her POV I kinda expected a little bit of internal monologue, not about how she didn’t trust what Zed was saying – even though she fully knew that she had some kind of ability, she just blocked it. But she’d used it plenty of times as a child and all of a sudden decided she didn’t have it??? – but more about what made her decide to become stronger.

There was the moment she was kidnapped. But she spent that time going over the fact that she is too weak to take on these new threats, and fair enough.

And there was this one scene, where she was kidnapped and was so focused on getting a telepathic message across to Zed about where she was. Like, sending out her exact location – but then wasted her *very limited* energy telling him not to come get her.

I didn’t mind the supporting characters. Nelson, Tina and Zoe were all great characters – and I feel like they would have made far more interesting main characters tbh. Just give me a book about Nelson dealing with his Grandma and trying to get Tina to notice how cool he is.

THE PARENTS IS ANOTHER STORY!

To be specific, Sky’s parents. They were sweet ok. They were artists and they were quirky in their own ways. But they were horrible parents really.

Neglectful, is the word that comes to mind.

Like, your child experienced an extremely traumatic event and spent a few weeks in a mental hospital to make sure she was alright and YOU DECIDE TO TAKE HER BACK TO THE PLACE THAT THE EVENT HAPPENED!!!!!!!!!!!! FOR MONEY??????????

Like, fair enough they didn’t know that it was the exact building she was held in. But they knew for sure that she was taken to Vegas. They themselves went to Vegas with the police and booked a hotel room when they found out that was where she was.

THEY KNEW VEGAS WAS WHERE SHE WAS KIDNAPPED OFF TO AND STILL TOOK HER BACK!!!!

THINKING HER SAFE HOME WAS WHERE SHE WOULD BE MOST UPSET?????

Zed is the stereotypical “bad boy” who takes his problems out on everyone else for seemingly no reason. That got tiring pretty quickly. But the book was published in 2010, so I guess after Twilight grumpy, brooding jerks were all the rage. I should also point out that the book is for teens, and I, at 20 years old am no longer a teen. Had I read it when I was 12 I probably wound have loved it. But I’m not 12…

The Pacing of this story was way off for me. There were some pretty big jumps in time. Which might be why I felt like there was a gap in Sky’s character development. Literally one chapter, Zed was all angsty and didn’t want anything to do with her, and the next he’s giving her a lift home on his motorcycle and grazing her knuckles affectionately. WHERE DID IT ALL CHANGE?? BECAUSE I HAVE CLEARLY MISSED SOMETHING!

I just felt like I should be feeling things. I should be getting emotional with the characters every time something happened… but I didn’t and I wasn’t emotional at all. A few parts made me laugh (people doing Yoda voice in books is just funny to me at 2am okay) but otherwise I felt nothing. I was a bit bored.

This is my first negative review, and I’m kinda sad. I wanted to love this book, but I just couldn’t.

Have you read this book??? What did you think?? What was the last book that left you feeling a bit bored??